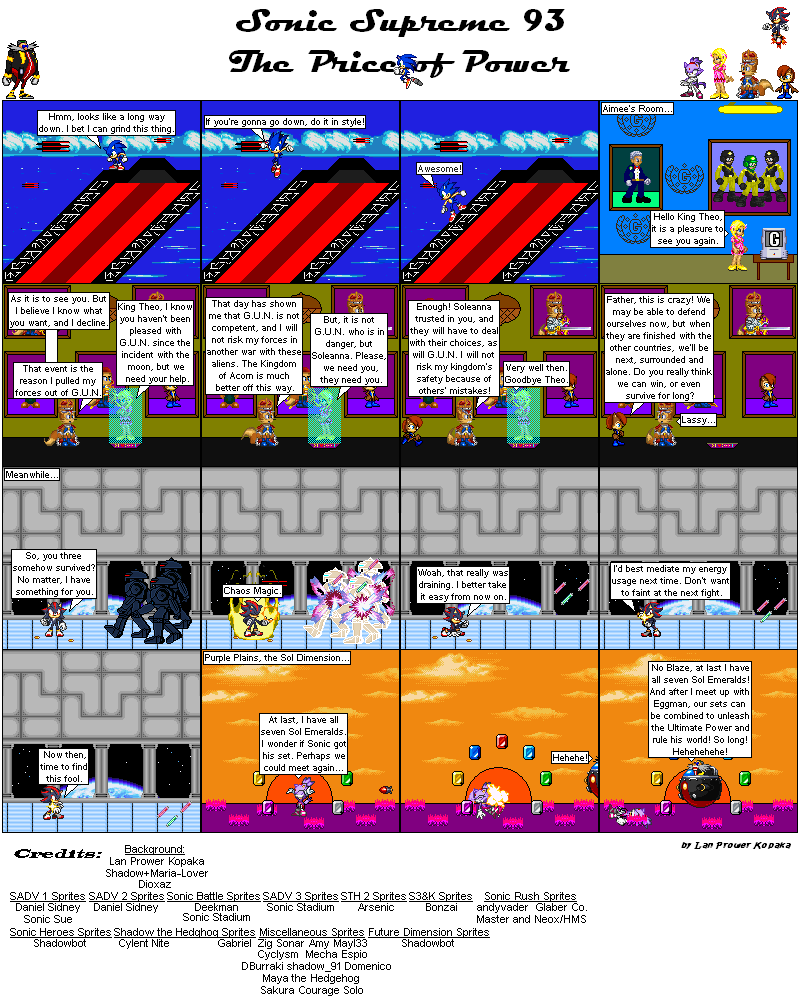 We're back to the comic! And Blaze is here! And Eggman Nega! And...oh boy, so much to say. Firstly, let's start by saying I really loved doing Purple Plains. It was fun to create as a sort of inverted Green Plains. As was making the scene with Theodore Acorn. Obviously they're kind of like expies for King Max and Princess Sally, but they're different enough and have a very different relationship than King Max and Princess Sally did.

Another thing to note is Shadow's aura ability we're seeing here. As we see in Sonic The Hedgehog 2006, Shadow can remove his inhibitor rings to give him an energy overload. It's implied he did it in Sonic Adventure 2 Battle as well when Super Sonic and Super Shadow had to do a super-massive Chaos Control, but it's never made clear. It would make sense though, because as you can see here, it weakens him the more he uses it, and Chaos Powers will burn through the reserve faster. It's essentially my reason why he doesn't just use the energy overload all the time. :P

Also, another note here is that Shadow has destroyed all the SWAT bots G.U.N. owned, or at least most of them. It's not too important, but it's important in the sense that Shadow is only getting farther along Snively's hate list...if he's not at the top already.

As one last note, the Ultimate Power hasn't really been talked about before, and even Blaze and Nega are a bit of a mystery for newcomers for now, but it's a concept from their debut game, Sonic Rush. The Ultimate Power is as Nega says, a power made when combining the energies of the Chaos Emeralds and Sol Emeralds. Think Hyper Sonic, but uncontained and with the potential to warp reality to incredibly dangerous degrees.

Okay, one more note. :P So, you'll notice that, like in the Time Saga, the Future Saga, and the Redemption Saga, we have branching paths. The top path leads to the Good Future, and the bottom to the Bad Future. It's probably the most important split, but it's up to you which path you take...or you can take both. Whichever works for you. ;)
​
Starring
​- Sonic The Hedgehog
- Army General Aimee Mayl
- King Theodore Acorn
- Princess Lassy Acorn
- Shadow The Hedgehog
- Princess Blaze The Cat
- Dr. Eggman Nega
Powered by