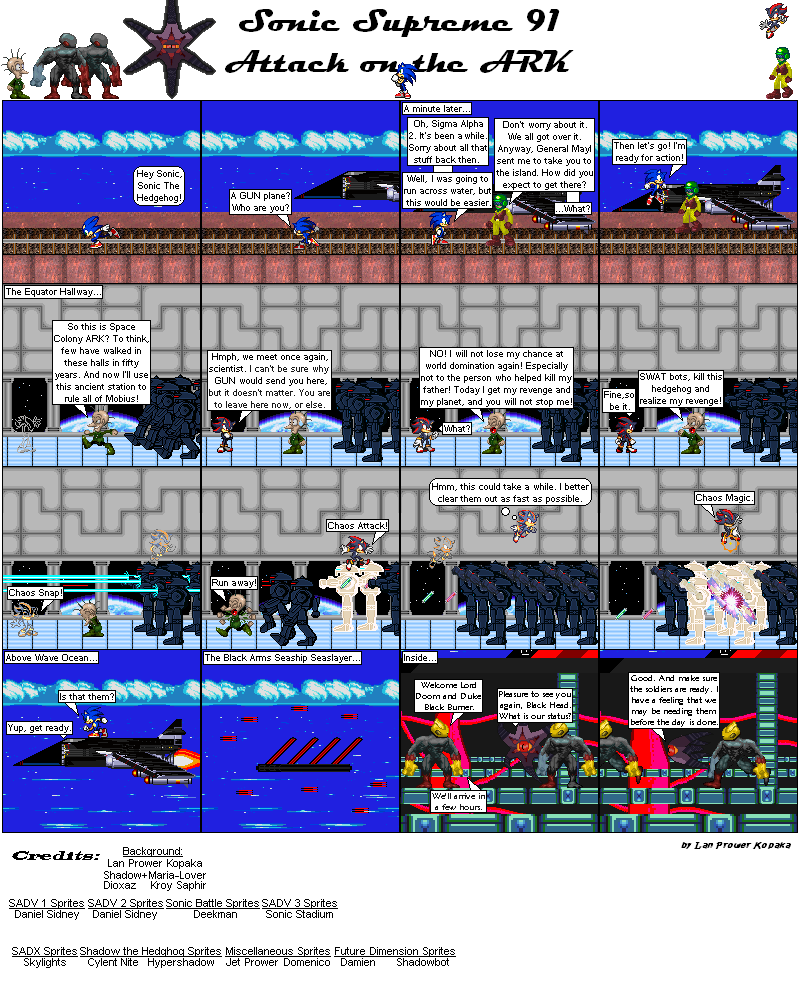 The next saga, at long last, covers the Alien Wars Saga! This is a saga we've been kind of building up to for a while. Finally, the new saga begins!

So, let's cover a few references here that are a bit more obscure. For one, we have the conversation between Sonic and Sigma Alpha 2. If you recall from Sonic Adventure 2 Battle, Sonic was arrested by him and his agents, and Sonic basically had to take out everyone aboard in order for him to escape. It's essentially what Sonic's apologizing for and what Sigma is forgiving on.

Secondly, Sonic's comment of running across water. It hasn't really come up in the comic yet, but Sonic's ability to run on water is something he can do. It's not something the average person would expect, but there it is. Thirdly, the two dukes we're meeting here aren't too important to the overall story, but, similar to how I've been giving G.U.N. some actual leading individuals, I did the same with the Black Arms. I guess it's kind of my way of showing they aren't just violent monsters, they have some organization among them.

In any case, we're finally approaching the 100th issue! I've been looking forward to this for a long time, since practically the beginning of the comic. As such, quite a few changes have been made in my mind for its direction over the years, but this version I feel is the best. Let's see how it unfolds!
​
Starring
​- Sonic The Hedgehog
- Sergeant Sigma Alpha 2
- Shadow The Hedgehog
- Space Fleet Admiral Snively "Kintobor" Robotnik
​- Duke Black Head
- Lord Black Doom II (Future)
- Duke Black Burner
Powered by