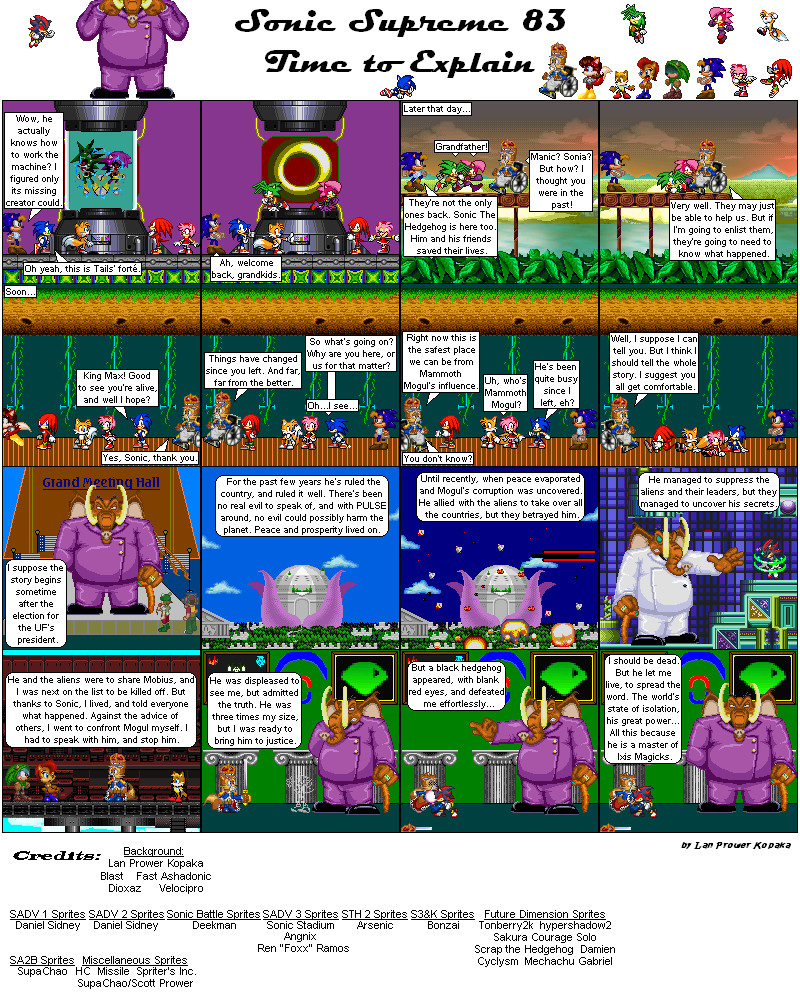 Time for a history lesson! This comic is finally tapping into the mysterious history of Mobius I created long after Sonic's adventures. Mind you, it's not a large history lesson, but we learn here that Mammoth Mogul was willing elected. It's kind of weird to think about these villains getting in as presidents, but Mammoth is a crafty person, so it's not that surprising he could work his way in.

So, a unique point of this comic you may notice is that, similar to Snively's roboticizer, they have an interesting source of power for it. Rather than the Master Emerald, it's actually a Special Stage ring. Normally, using with a power source like that is like playing with fire, but keep in mind we are 1000 years in the future, so any dangers that may have existed long ago have been learned and defended against. Otherwise, yeah, it would be a bit reckless to use a dimensional gate for a power source...

This comic also introduces what are called Ixis Magicks. I'll get more into it next comic, but suffice it to say, all the oddities of this time period are related to him or his magic in some way. Either way, he's clearly dangerous, and will be a tough opponent to take down for our heroes.
​
Starring
​- Jules The Hedgehog
- Sonic The Hedgehog
- Miles "Tails" Prower
- Robo-Manic
- Robo-Sonia
- Knuckles The Echidna
​- Amy Rose
- Manic The Hedgehog
- Sonia The Hedgehog
- King Maximillion Acorn
- Fiona The Fox
- Mammoth Mogul
- Shadow The Hedgehog
- Rob The Hedgehog
- Princess Sally Acorn
- Antoine D'Coolette
Powered by