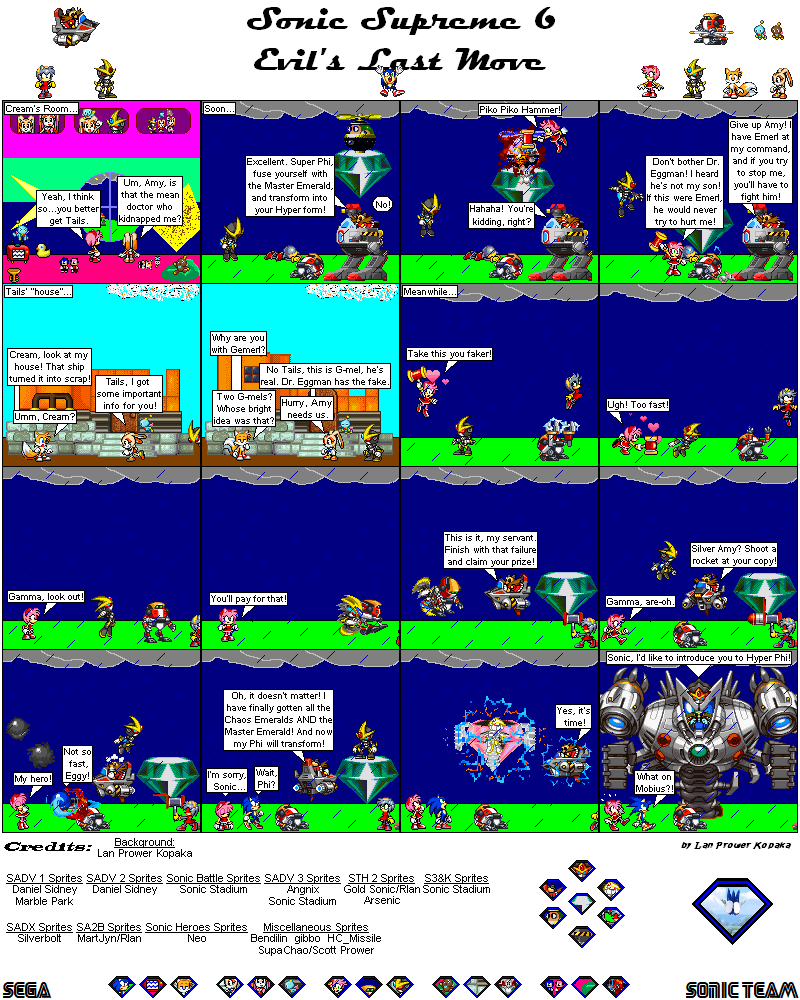 And that house belongs to Cream The Rabbit! Technically her mom Vanilla owns the house, but either way, it's a fancy house with a lot of land...also, in case you didn't know or forgot, in Sonic Battle Amy was Emerl's self-declared mom, which I guess makes Sonic the dad, and thus her husband. Wow. <_<

Plenty of references in this comic, so let's get to it! In Sonic Advance 2, Cream, her mom, and her pet Cheese The Chao were kidnapped by Dr. Eggman for mysterious purposes. Sonic saved them, and Cream became a new ally to the team. But in Sonic Battle, she became best friends with Emerl, and after he disappeared, she had hoped she'd see him again. In Sonic Advance 3, Eggman tried recreating Emerl as G-mel, but Tails reprogrammed him, and G-mel has been living with Cream ever since. So, just to make things clear, G-mel is Cream's robot, and Gemerl is a nickname for Phi, Eggman's robot (G-mel's name is a confusing thing where it seemingly translates to G-mel, but Sonic's IDW comic series calls him Gemerl, presumably since Sonic Team has not officially confirmed his name in English, so...yeah, it's a confusing situation).

Either way, the ruse is up, and now Phi has both the Chaos Emeralds AND the Master Emerald. With both, he can reach the ultimate form, the "Hyper" form, and if Super Sonic had trouble with a fake Super Emerl before, a regular Sonic fighting a Hyper Phi...things will not go well...