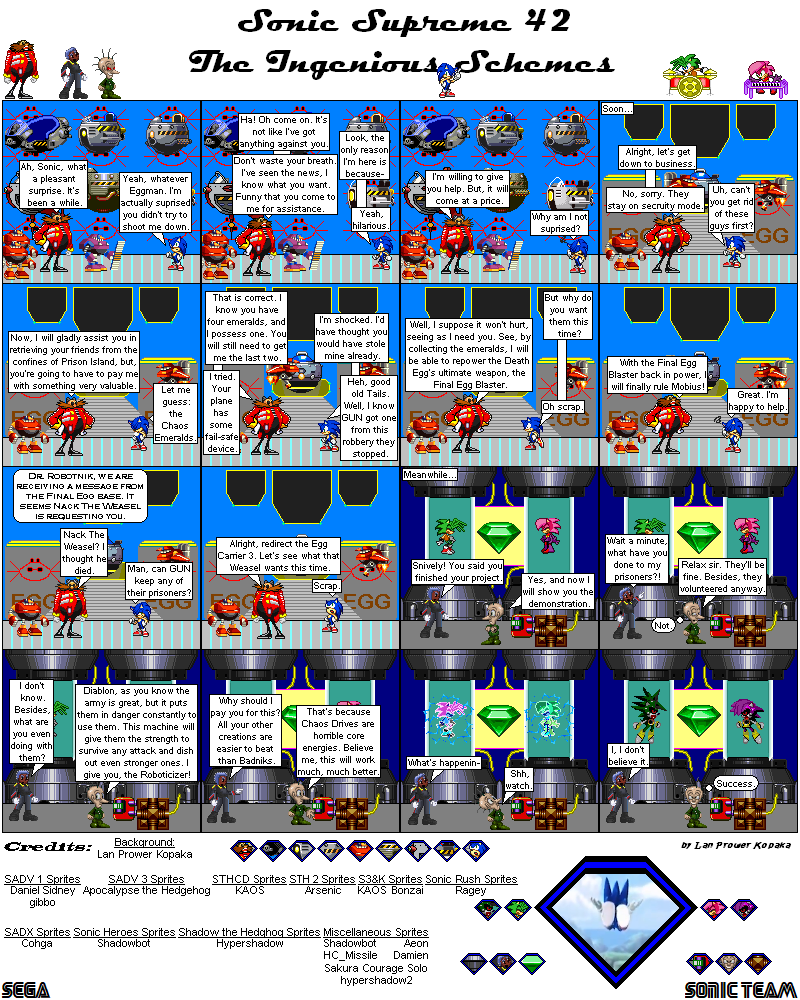 And so Manic and Sonia feel a fate worse than their parents could have ever predicted. Being roboticized thankfully isn't too painful in this universe, but you can imagine it doesn't feel like something you want to feel...

That said, the Master Emerald has a purpose for being in the machine, and as you can see, it's shrunk. Whenever someone other than a guardian of the Master Emerald touches it (Sonic sort of counts for going Hyper), it shrinks to contain its power. This happened before in Sonic Adventure 2: Battle, but it wasn't really pointed out. It's more just a theory, mind you, but still, I'm making it count here. Did I make this up? Yes. Does it matter? Not really. :d

In terms of other references, we have a few interesting bits. Eggman mentions the Final Egg Blaster, a special weapon on the Death Egg that's so powerful, it can destroys stars. In this series, where we've seen super powered hedgehogs, a planet busting laser, and literal gods, it's quite interesting Eggman has managed to create an even greater weapon than them all. It has limitations, thankfully, and after the events of Sonic Battle, it's also broken.

The Death Egg itself has been a big part of the series since Sonic The Hedgehog 2, and this particular model Eggman's talking about is the original. It was ruined after Sonic The Hedgehog 3 & Knuckles, rebuilt in Sonic Battle, and abandoned after the Final Egg Blaster broke.

As for Snively's snide comment about Chaos Drives, they are those little jewel tube things you give to Chao in Sonic Adventure 2: Battle. Also, in case you couldn't guess, the robbery Sonic mentions is Nack stealing a Chaos Emerald. Not surprising. :P