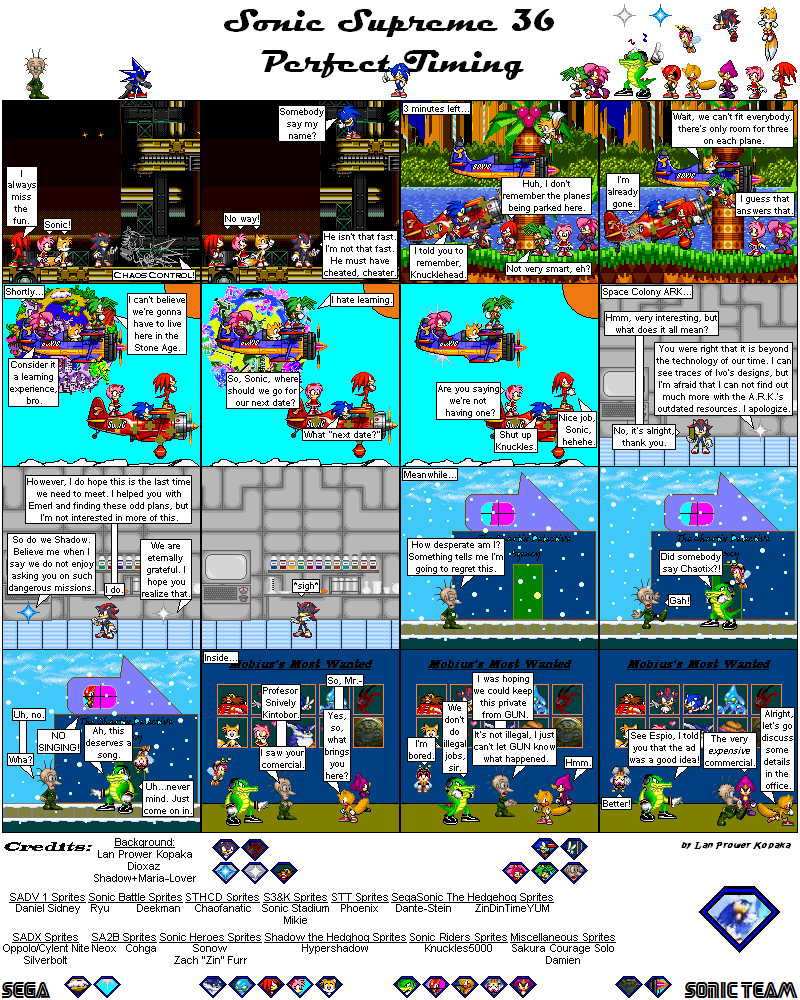 So yes, if you were very eagle eyed and noticed, Sonic's foot was actually in Sonic Supreme 25. It's obviously hard to tell, but it's there. I don't make my secrets easy to discover. :P

That said though, I do go all out in explaining references. For example, we finally see inside the Chaotix's building, and specifically their Most Wanted wall. Originally, I was planning on showing this room more often to show the changes in who is the top ten most wanted, but it's a feature that depends on how much I use the Chaotix. Hopefully we'll see it again, but who knows for now.

As for who are on the wall...Dr. Eggman, Shadow, Sonic, Chaos 0, any remaining survivors of the Black Arms invasion from Shadow The Hedgehog (The Game), Tails, Amy, Big of all people, Nack The Weasel, and the Babylon Rogues. I think by this point casual readers know most of these, except for Nack and the Babylon Rogues. The Rogues are from Sonic Riders, a bunch of avian thieves that cause trouble, but Nack...we'll get to him. ;)

One other thing to discuss is Shadow's scene. Him presenting plans to two mysterious...lights, is not meant to be understood yet, but Shadow does reveal that the two lights asked him to track down Emerl in Sonic Battle. Very interesting...

And as if that's not enough, we still have loads of questions! Now that it looks like Manic and Sonia are trapped here in the past with Sonic and friends, how will they adjust? But the bigger question is: what does Snively hiring the Chaotix mean? And the biggest question is...will Vector ever sing again?! :O