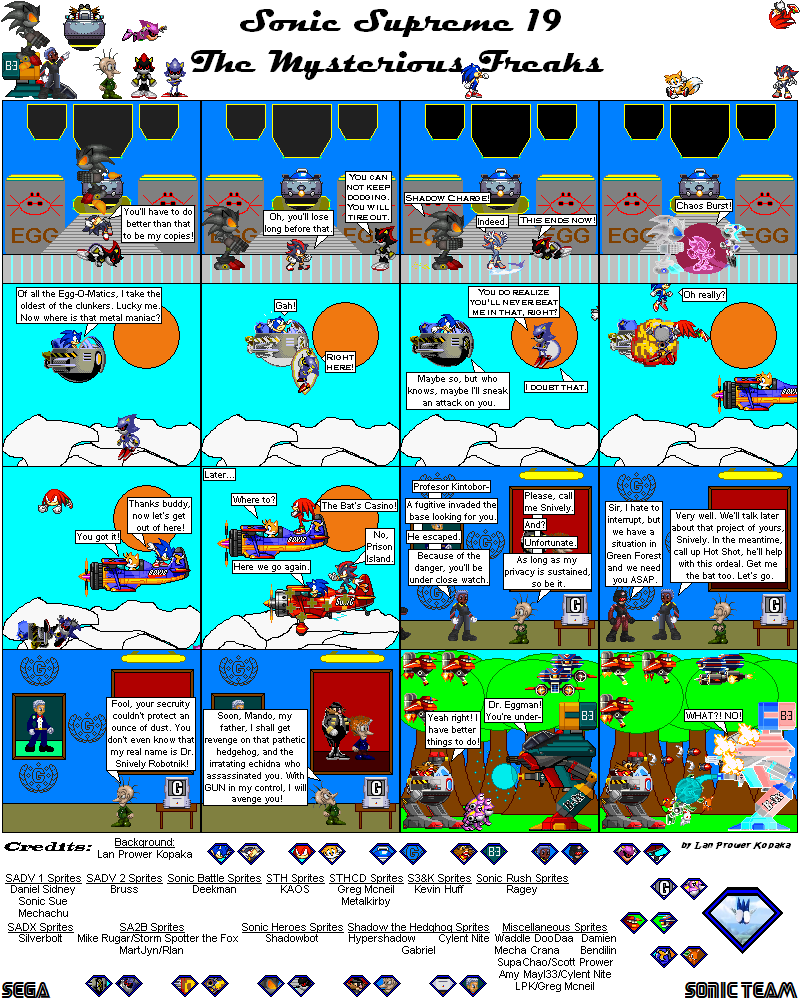 This issue definitely came out a bit more jumbled than I'd like to see, but there are still things I like about this. For example, the Beam Cannon was made by me. It took a lot of work to make it look right, but I think it works. I love the little particles that come toward the cannon. Making sure it acted like how it did in the game took a lot of work playing the game, but it's never a bad thing to play Sonic Adventure 2: Battle. ;)

In terms of references, there's a lot of little things, and a major thing as well, but to start with, Sonic's reference to "the old clunker" is actually explaining that, yes, that is Eggman's first Egg Mobile. I bet that cushion is really comfortable. We also hear Knuckles and Shadow arguing about where to go next. Knuckles, naturally, wants to go to Rouge's casino, Club "Rouge." Yes, she owns a casino, as we see in Sonic Battle. I'll add that, if one keeps a close eye out, they may find out where Metal Amy is hiding...

We're also introduced to Snively Robotnik, a plot element that will be leading to very interesting ideas, but I'll definitely admit if I was writing this with my current experience, I'd handle it differently. Snively is a character typically seen in the Sonic comics written by Archie Comics, but has also appeared in the Sonic The Hedgehog cartoon and some other books. I had planned on including Snively as a sort of game universe version of the character, similar in only base terms to the comic/show universe. Unfortunately, during the original release, some people didn't understand what I was attempting to do, which I think hurts the story if you're expecting Snively and other non-game characters to be their original selves, hence I'll push it a few other times to make the differences clear.

As such, I want to make it clear: any characters not from the games are not related to their outside media. I may throw in cameo characters, but the sprites I use are for their own individual purposes. Again, hopefully I'm not confusing anyone by saying all this, but I just don't want more confusion than some people may already have. ^^;