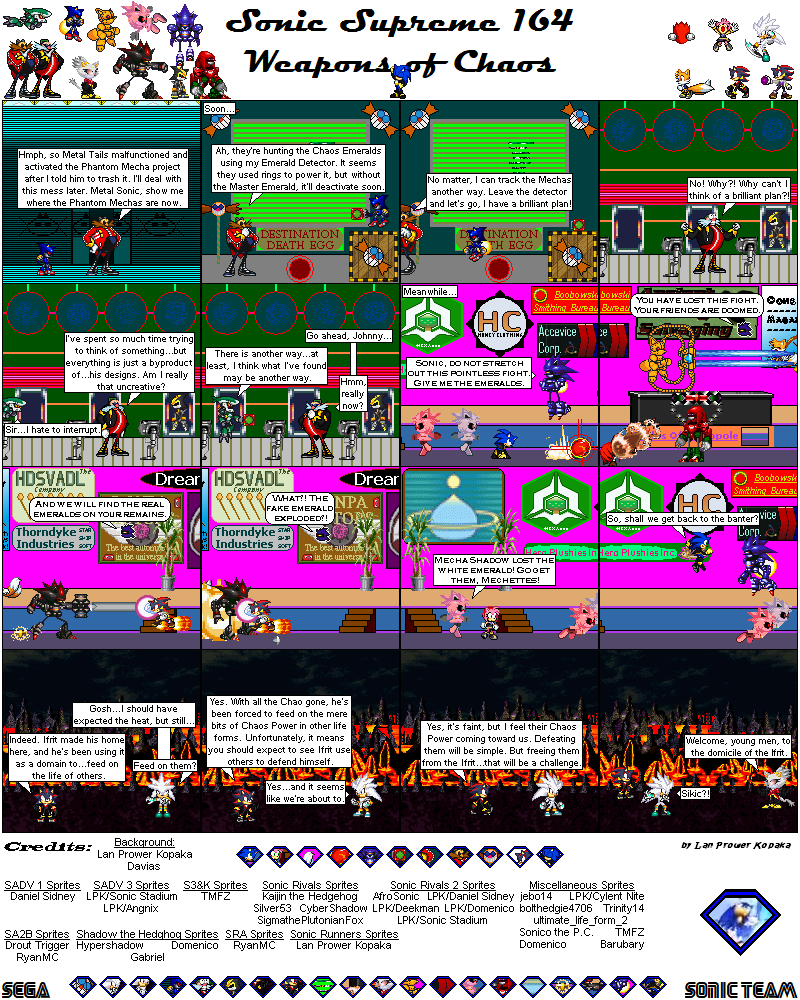 The battle between our heroes and the Psycho Robots rages on! But in the meantime, we see that the Eggmen are still scheming something...and of course we can't overlook the future, where Silver meets his old friend Sikic!

Obviously this isn't the Sikic from his future, but the Ifrit Timeline where the monsterous Ifrit ruined the world, and managed to enthrall Sikic, just like he did with Shadow and so many others. Luckily they have numbers, but will that be enough to defeat the villain this time? o.o

Speaking of numbers, it seems numbers aren't helping our heroes in the present, especially with those Chaos Emerald powered weapons. I wanted to show that the Mechas were more than just hardier in metals, they also have figured out how to harness the emeralds into actual attacks, similar to Shadow using them for Chaos Powers, though obviously not as varied. Since there's only four emeralds owned by the Mechas, Mecha Sonic doesn't get a special, but he has his connection to the Special Stages, so he can just rely on Special Stage Control, if we want to call it that. :P

As one last note, we see Tails' fake emerald explode! I was thinking about how to handle it, considering the only time we've seen it happen is Sonic Adventure 2: Battle, and the fake emerald Sonic "slam dunked" into the Eclipse Cannon itself blew up most of the cannon, but that was also with the fake emerald mixing with seven Chaos Emeralds. Since this is just Mecha Shadow's white emerald, the explosion is big, but not massive. So...yeah, Amy, be careful with yours. ^^;
​
Starring
- Metal Sonic 2.0
- Dr. Ivo "Eggman" Robotnik
- Johnny
- Dr. Eggman Nega
- Metal Sonic 3.0
- Sonic The Hedgehog
- Mecha Sonic
- Knuckles The Echidna
- Mecha Tails
- Mecha Knuckles
- Miles "Tails" Prower
- Mecha Shadow
- Shadow The Hedgehog (Present)
- Mecha Amy
- Amy Rose
- Shadow The Hedgehog (Ifrit Future)
- Silver The Hedgehog
- Sikic Faymore