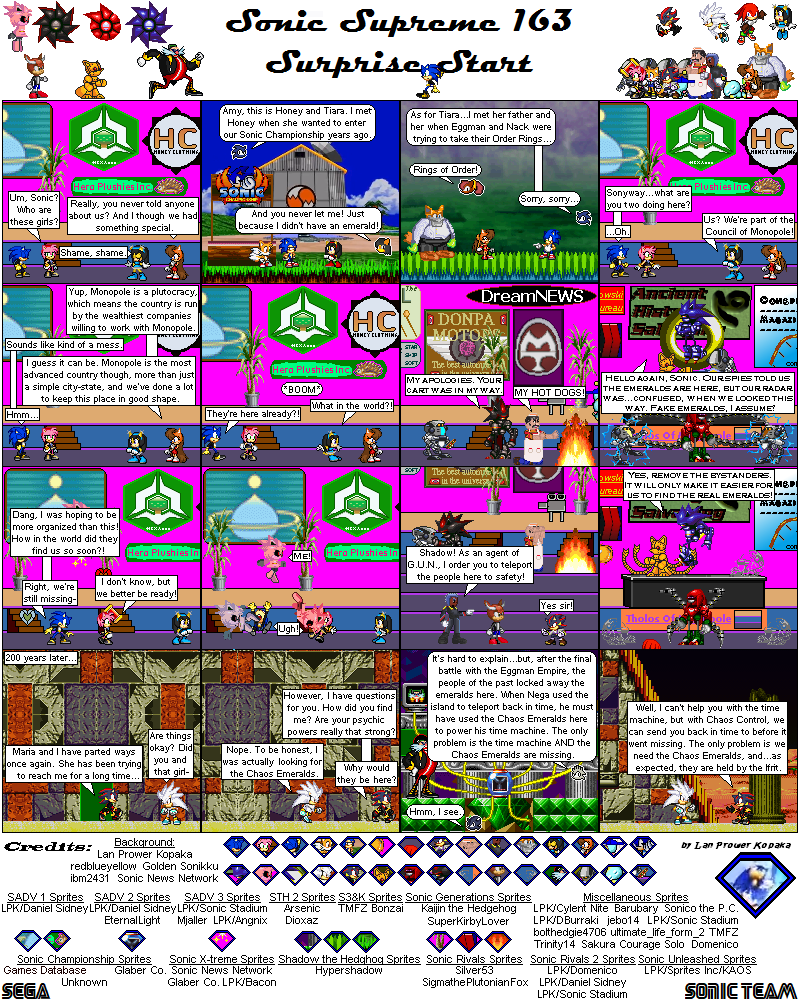 Well...this was another super tough issue. If the last issue nearly killed me, this one nearly destroyed me...unfortunately I made this saga in a time period where I had a lot of personal stress, so I was either just rushing to make the comic or not touching it for months. When I finally got to feeling better again, I basically redid a lot to make the comics to fit my standards again. I think with the combination of the scope of this arc and my personal issues, this probably took the longest of all issues to make. But hey, bright side time! Thankfully it's now done!

Anyso, let's move on and actually enjoy things here! Aside from the challenge of using the various characters and sprites, we see the challenge unfold for our heroes. Thankfully the plan of having Shadow heroically protect the members of the Council of Monopole may have worked...but that's just step one. Step two...defeat the Psycho Robots!

One of the things I wanted to do with this issue was show why dealing with the Psycho Robots here was a big deal. I don't know how subtle it is, if it even is, but the point of Sonic's plan is to show that G.U.N. is actually good at protecting them, and at the same time get them all together and finally defeat the Mechas once and for all. Unfortunately...since the Mechas immediately knocked out Captain Uranus, Pluto, Saturn, and Venus, I guess the only G.U.N. agent left is Shadow and Rouge, though, with her...well, you'll see. :P

In addition to all that, the Shadow of the Ifrit Timeline is finally back to normal! With him and Silver together, that Ifrit monster is their next target! If they can beat him at least. :O
​
Starring
- Sonic The Hedgehog
- Amy Rose
- Honey The Cat
- Tiara Boobowski
- Professor Gazebo Boobowski
- Captain Uranus
- Mecha Shadow
- Don Fachio
- Chao Johnson
- Jimmy Chaowder
- Captain Venus
- Mecha Knuckles
- Mecha Tails
- Mecha Sonic
- Captain Saturn
- Captain Pluto
- Mecha Amy
- U78-X/D Diablon
- Rund Tarbh
- Shadow The Hedgehog (Present)
- Miles "Tails" Prower
- Knuckles The Echidna
- Shadow The Hedgehog (Ifrit Future)
- Silver The Hedgehog