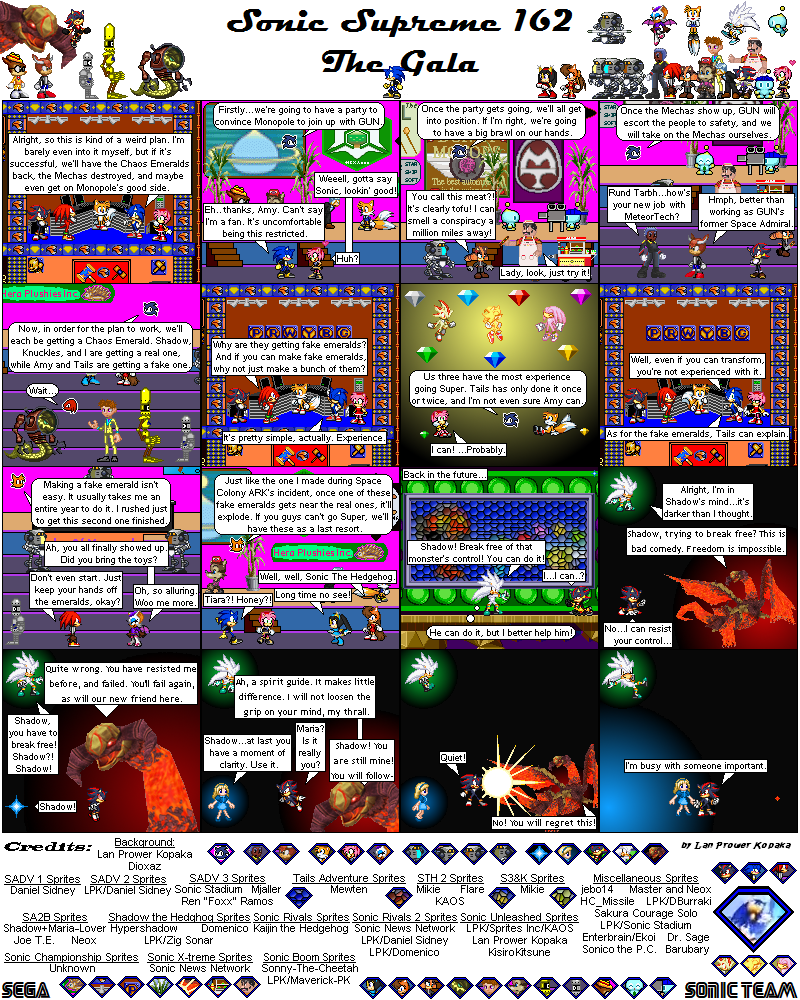 Oh boy did this issue have a ton of stuff in it! This was basically the big issue that nearly killed me, only because there was so many things I had to make sure I got just right. Usually I try to keep a buffer of comics so that I can avoid problems like this...but this drained my buffer, and thus I put the series on hiatus pretty much for this. Even now, while I've got most of the issues properly tied up and ready, I'm still looking them over really closely to make sure I didn't leave any major mistake. Hopefully I didn't! ^^;

But on the bright side, at least I've got the comic done now, and I can talk about a lot of the big stuff here!

For instance, we see the inside of someone's thought, and Shadow's is, well, dark. It's kind of meant to be dark and empty since he's basically been enslaved to the Ifrit for 200 years. And even at this point, he's only now seeing the light of Maria once again. This was also a good chance for me to show more of the Ifrit's real personality, not merged with a thrall or the more mindless beast form we see in Sonic Rivals 2. But Maria's appearance just goes to show that even though she was going to leave the land of the living...she just wants to stay by Shadow's side. How sweet. ^.^

Speaking of Maria, look at all these cameos! You've got Lyric, Sticks The Badger, Bocoe and Decoe, Nelson Thorndyke, Wes Weasely (as the Archie styled weasel rather than the human form [I just want more animal beings, and his design in Archie was fantastic]), Don Fachio, even Honey and Tiara! We also finally meet Rund Tarbh, the creator of the Guard Robo Captains! It seems he's been working for MeteorTech ever since he got fired from G.U.N. Intriguing details all over this issue! And we'll definitely see more of them soon, as well as going over a few other details as we continue in the next few issues.

As some extra notes to add, the various costumes are mostly references. Sonic, Tails, and Shadow are dressed in outfits you could unlock in Sonic Rivals 2, Amy is dressed in that random outfit from the Sonic X intro, Rouge is dressed in an outfit from a Sonic Channel artwork, and Knuckles...well, that's unique (though with the release of Mario & Sonic at the Olympic Games Tokyo 2020, I guess it kind of looks like his fencing shirt? Sort of...). Even Sticks is wearing a suit! Everyone's dressed up for this gala!