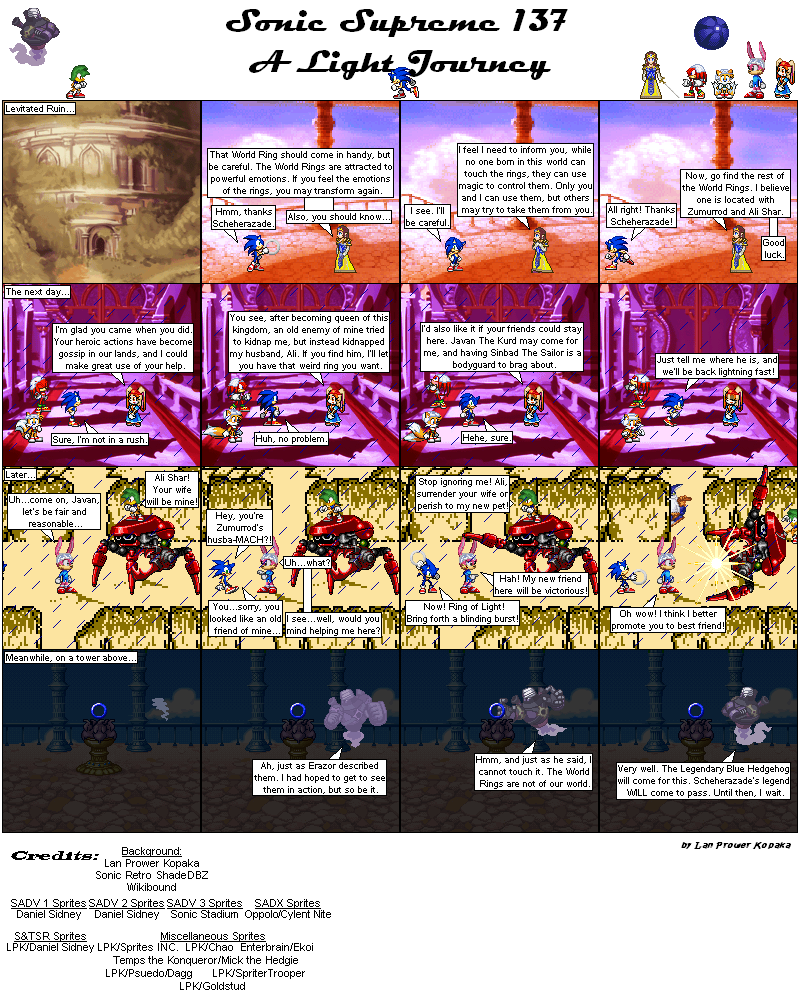 As with so many comics of this story arc, it's been a tough job to get the sprites, backgrounds, and even plot info I wanted to work with. Aside from our mysterious genie in the last row, all the characters seen are based off real characters from One Thousand and One Nights. I figured for one of these roles, I'd give it to an old friend of Sonic's we've yet to see so far. The crab monster I had planned on appearing as a minion of Shahryar, but I dropped the idea when I couldn't fit everything into one story.

This works pretty well though, and I get to do what I wanted to do and feature another tale from the original tales. I liked the idea that all of the events we see in the game and in this saga are what happens after the end of the tales, and this is one of the more well-known tales. As for the genie we see...we'll see him again soon. ;)

Also, as for Scheherazade's line about only Sonic and her being able to hold the rings, I wrote that to clear up the fact that, as far as we can see, only Sonic holds them in the game. However, Sinbad mentions using the Water Blue Ring in the past, and they're also contained in djinns like the Ifrit. I figured that needed to be addressed; basically, if you're going to use that ring, you'll need to have some way to hold it. Otherwise, it's like trying to catch smoke...
​
Starring
- Sonic The Hedgehog
- Queen Scheherazade
- Ali Baba
- Sinbad The Sailor
- Zumurrod
- Ali Shar
- Javan The Kurd
- Big The Cat
​- Guardorn
Powered by