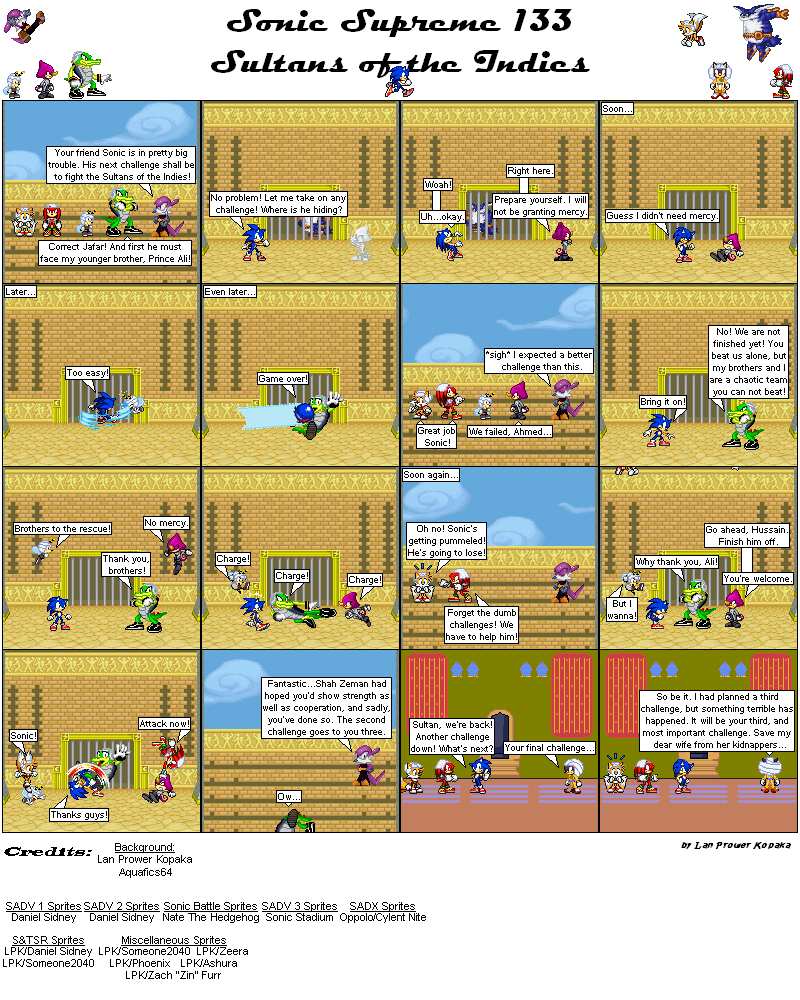 And now things get more complicated...for me at least. Introducing new Arabian Nights characters isn't the easiest of tasks, but making them can be a pain. These three are Hussain (Vector), Ali (Espio), and Ahmed (Charmy). They're actually a part of the stories of the original book, but this is where we start talking about the squick and ick of the One Thousand Tales...

Basically, all three of them want to marry their cousin, Princess Nouronnihar. In order to marry her, however, their father, the Sultan of the Indies, says they each have to find the rarest item they can find. Basically, from what I could find, Hussain found a magic carpet, Ali found a "perspective glass" that lets him see miles away, and Ahmed found an apple that can cure any disease. The princess gets sick, the three brothers use their gifts to go home and save her, and apparently the father can't decide, so he leaves it to a bow-and-arrow contest to decide the winner. Ali wins, they have a wedding, and the story ends on an anticlimatic note.

Yeah...this is a weird, weird book. This is one of the tamest stories too. Needless to say the book didn't hook me at all when I tried to read it, so...I can't say I recommend it other than to know the backstory of this issue. As for the issue, Sonic AND the other two basically were being tested for their teamwork abilities. The brothers were told by Jafar to attack like that to see if Ali Baba and Sinbad were also good and strong.

Either way, I do wish I had more comics to work on this saga, but since it's only going to be ten issues, I didn't get to show off Sonic's fights. But don't worry, next issue will be featuring something red hot. ;)