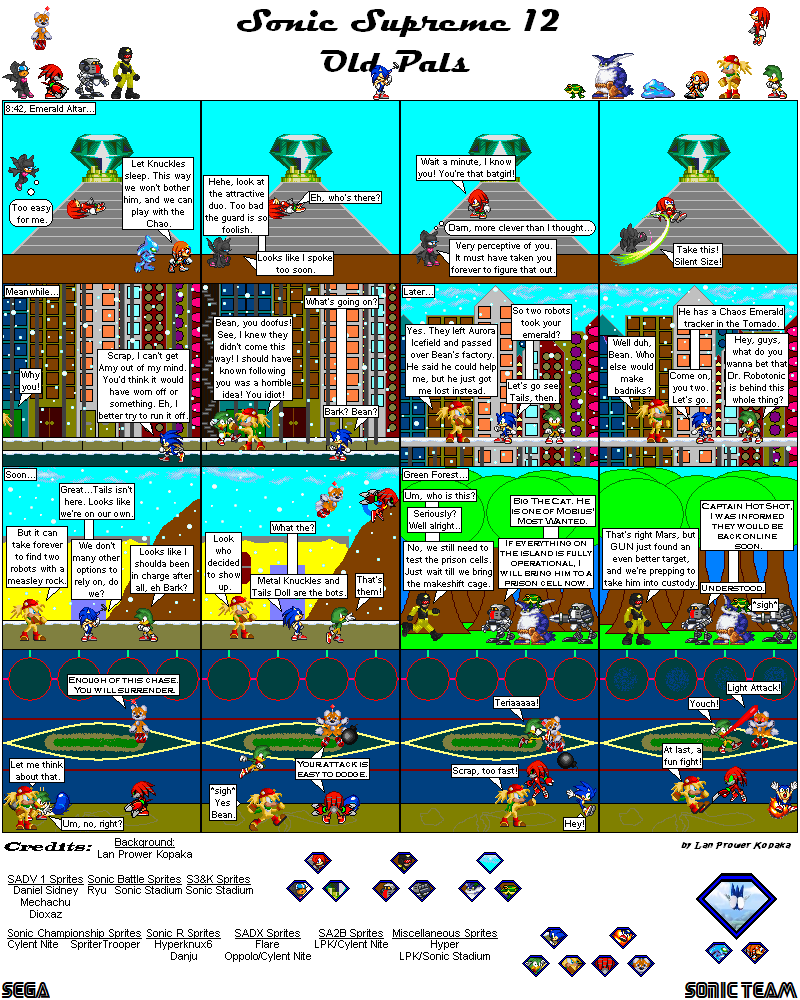 "Who else would make badniks?" Well...better you don't know that, Bark...

Also, huzzah, Ninja Rouge! For those unaware, Rouge is a part time secret agent for GUN, and part time jewel thief. And her big score she wants is Knuckles' Master Emerald. Unfortunately, as established with Sonic Adventure 2: Battle, she has a bit of a soft spot for him. So, to answer the big question...yes, Silent Size is the name of the attack. Okay, okay, and yes, Rouge is still attracted to Knuckles. But of course the problem is she's attracted to the Master Emerald, and, well, you can guess what happens next. :p

We get to meet a bunch of new characters here in this issue, so let's go down the line. We meet Bark and Bean, two characters from Sonic Championship (or Sonic The Fighters, if you prefer). They've been portrayed as helpers and hindrances in other media, but in the case of Sonic Supreme, they're just those two guys who keep getting roped into adventures. In opposition, we meet Tails Doll and Metal Knuckles, characters from Sonic R. While they haven't had many chances in the games to shine, they've been freed from stasis for Sonic Supreme, and they're already causing trouble!

We also introduce Captain Hot Shot, leader of the Scorpion Troop, and Captain Mars, leader of the Haptopoda Troop (yes Chrome, that is a real word). The purpose of all these troops is to show GUN isn't just two groups of incompetent soldiers. They're four! Within one section of the military!....-_- Yeah, GUN kind of sucks. Case in point, they're arresting Big The Cat, of all people. Big was arrested back in Sonic Adventure 2: Battle for obstructing justice (a.k.a. getting run over by their very, very oversized truck <_<) and escaping Prison Island (you know, the one that blew up! ....*facepalm*). Froggy's just along for the ride.