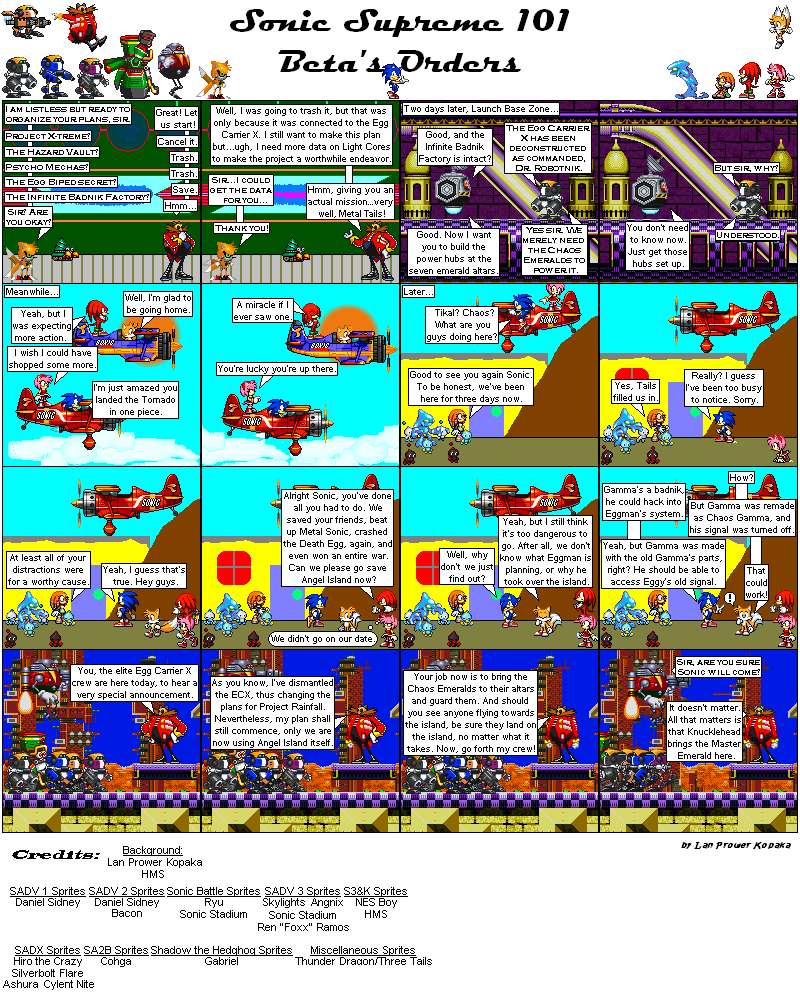 And so with all that Sonic The Hedgehog 2006 craziness out of the way, we begin the Good Future Timeline! This takes place after the time reset from the end of Sonic The Hedgehog 2006. Our heroes don't remember anything from the disastrous past timelines (although Sonic may remember Elise at least...maybe), and as far as they're concerned, the Festival of the Sun was just a cool party to hang out at.

But with the vacation over, Knuckles is fed up with waiting; he wants his home saved, once and for all! Can our heroes actually pull off this difficult feat?! :O

We have a few new robots here like Metal Tails! Although the others aren't new if you've played Sonic Adventure DX: Director's Cut. Beta, Delta, Epsilon, and Zeta were all designed, along with Gamma and ZERO, to act as Eggman's new commanders for his empire, but since Eggman is...Eggman, he set them up on a weird task, and punished them when they failed him. He's a weird boss, but hey, at least now he's brought his E-Series crew back together! Well, minus one beloved member...
​
Starring
- Metal Tails
- Dr. Ivo "Eggman" Robotnik
- E-101 "Beta"
- Amy Rose
- Sonic The Hedgehog
- Knuckles The Echidna
- Miles "Tails" Prower
- Chaos 0
- Tikal
- Eggrobo
- E-100 "Alpha" / ZERO
- E-103 "Delta"
- E-104 "Epsilon"
- E-105 "Zeta"
Powered by