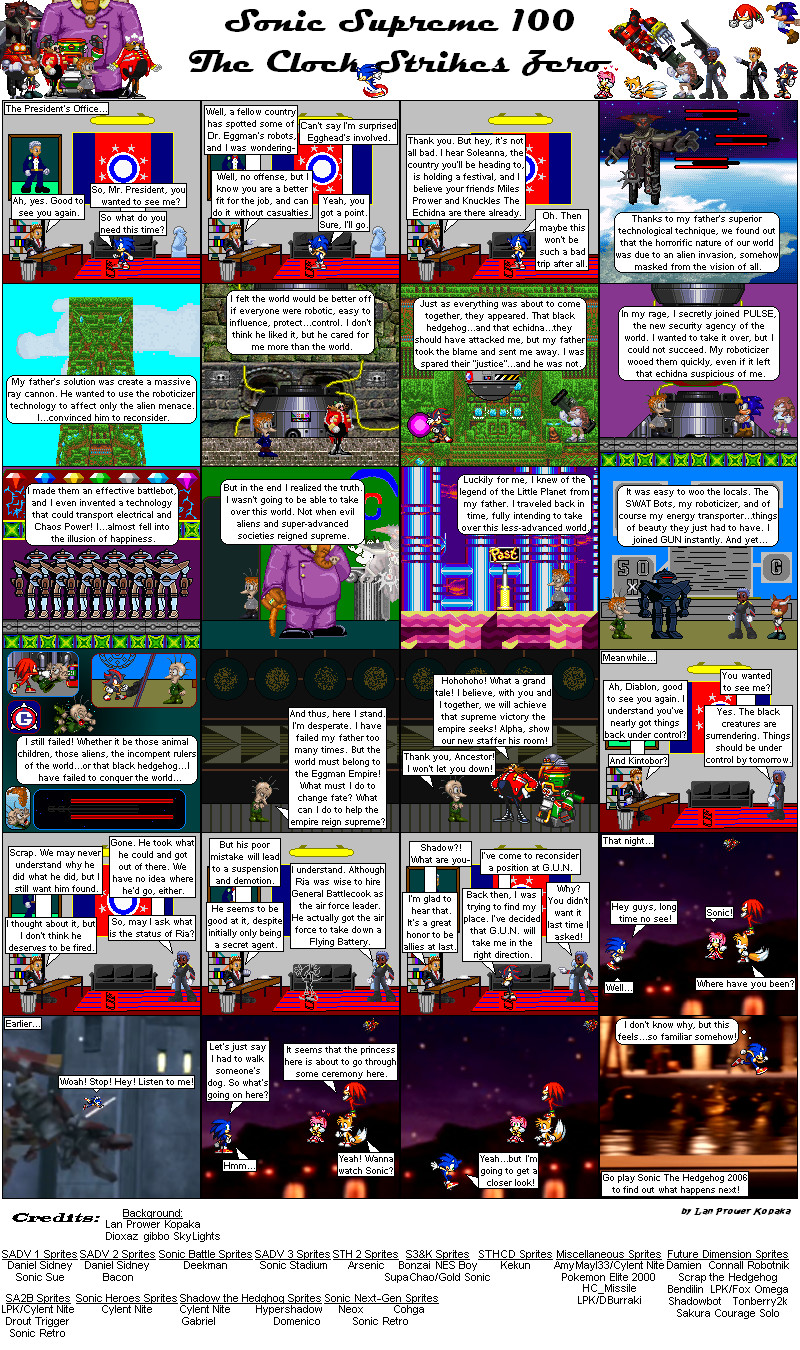 ​At last, Sonic Supreme 100 is released! It's so good to say, I've been waiting so long to finish this and show it off, but the day has arrived! It's also the longest comic I've made, and I definitely enjoyed making it. I think most of the comic speaks for itself, but there are a few things to say.

For one, Sonic Supreme is not going to feature the events of Sonic The Hedgehog 2006, because even if I had all the sprites I'd need, I don't think I could really showcase the game the way it deserves to be showcased (granted, neither did the game, but let's not get into that :P). So the blurb at the end telling viewers to check out the game is telling you where to go next.

That being said, there will be a Sonic Supreme 101, but the game will take place between the two. If you don't own the game or don't want to own it (and who would blame you? =P), you can find a cinematic cut of the game here. To spoil things a bit, there is a reset of time after Sonic The Hedgehog 2006, and thus why there are the Good Future splits in Sonic Supreme. You've already read those if you've followed the Good Future side of the comics, but if you're curious to see the bad sides, you can see them start here, here, and here. If you're just interested in reading the spinoff comic that goes deeper into what happens in the Bad Future, you can go here. There's also a spinoff comic dealing with another timeline, created by Solaris, that you can find here. None of it is required reading, but you may be interested, so there you go. :P If you're just interested in the next part of the story, just click the next page button as usual. ;)

With all that said, I'm really glad the comic has done as well as it has. I'm always trying to better myself and my comic, so any compliments or criticisms I get are always considered when making future issues. It's my goal to make one of the best sprite comics out there. Thank you to all my readers who have helped me out along the way, and my friends who have contributed their skills or opinions, you guys matter a lot. Here's to the next hundred! :D
​
Starring
- Mr. President
​- Sonic The Hedgehog
- Lord Black Doom II (Future)
- Snively "Kintobor" Robotnik
- Dr. Mando Robotnik
- Shadow The Hedgehog
- Hawking The Echidna
- Jules The Hedgehog
- Mammoth Mogul
- U78-X/D Diablon
- Space Fleet Admiral Rund Tarbh
- Knuckles The Echidna
- Dr. Ivo "Eggman" Robotnik
- Eggrobo
- E-100 "Alpha" / ZERO
- Amy Rose
- E-123 "Omega"
- Miles "Tails" Prower
​- Egg Cerebus
Powered by