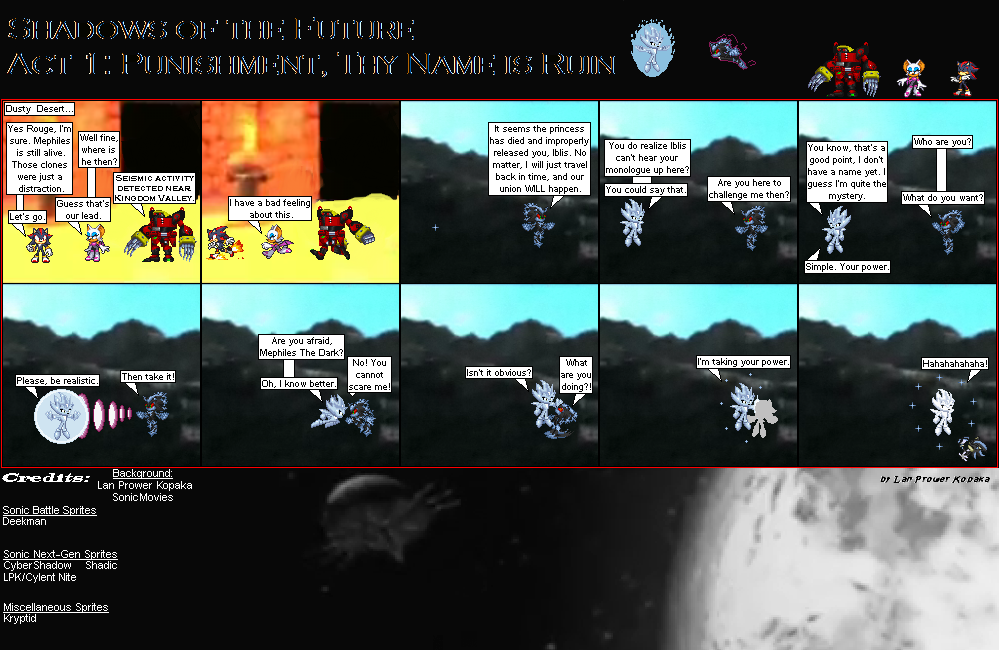 ​Dark days are approaching Mobius, as a brand new comic begins! This is Shadows of the Future, a new sprite comic created by myself. This comic takes place on the Iblis Timeline, the time period where Princess Elise III, the ruler of Soleanna, perished in a dreadful crash on Dr. Ivo Robotnik's flying fortress.

Her death has released Iblis, the Force of Solaris, one half of the God of Time. Mephiles, the Will of Solaris, the other half of the god, has been planning since Sonic The Hedgehog 2006 to merge with his other half, but this mysterious hedgehog may have just prevented that! But how, and why?

Shadows of the Future will be a more serious comic, but will still keep the charm and goodness that Sonic Supreme gave. I've got a lot of stuff planned for this new comic, so keep your eyes on it! Sonic Supreme, the sibling comic, will continue on unhindered by this one, so if you're a fan of the first, be sure you can enjoy both for many weeks to come! 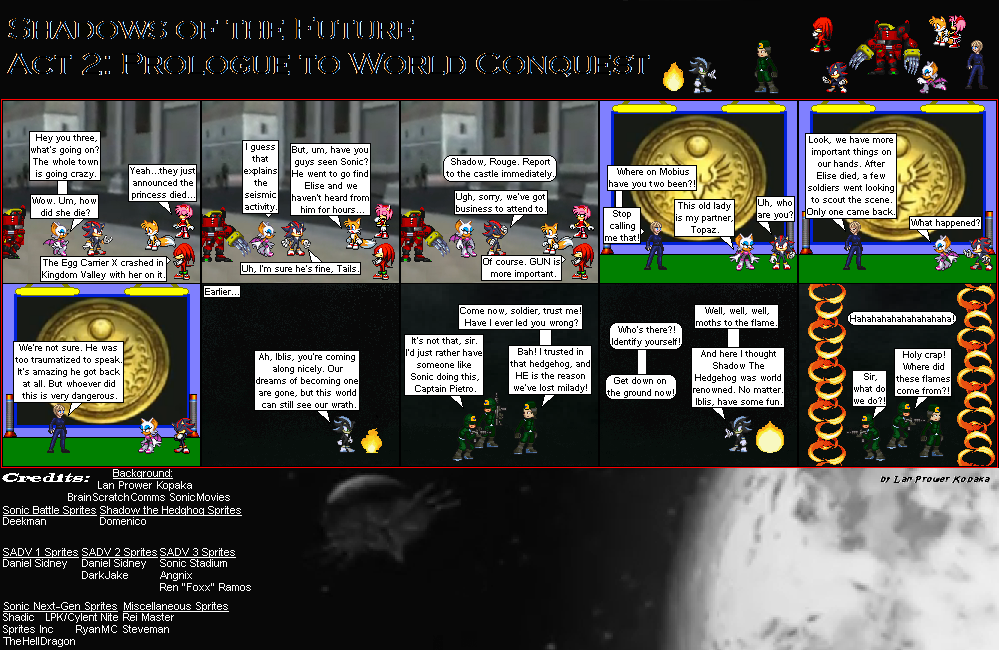 So, if you couldn't tell, that man there leading the soldiers is Captain Pietro. You might not be familiar with him, but if you've played Sonic The Hedgehog 2006, then you know this guy, and probably loathe him. Who is he?
http://www.youtube.com/watch?v=lYXldDxdfSI

Now, as you can tell, if you didn't know that the captain was Pietro, you essentially wasted three minutes. But what makes him so much of a jerk is what he says afterward. He says he "didn't want anyone else involved in Soleanna's businees...But you seem to have the strength..." So essentially, Sonic, the world renowned hero who's stopped Eggman dozens of times, and was even considered an idol to the President of the United Federation AND helped G.U.N. save the world from aliens (and there are G.U.N. agents on Soleanna by the way), he not only didn't trust Sonic, but didn't think he was strong enough to save the princess. While he and his squad just stand around trying to decide what to do.

Anyway, we also get to meet Topaz, another special agent like Rouge and Shadow. Fans may remember her from Sonic X. I felt like introducing more secret agents, and who better than her? ;) 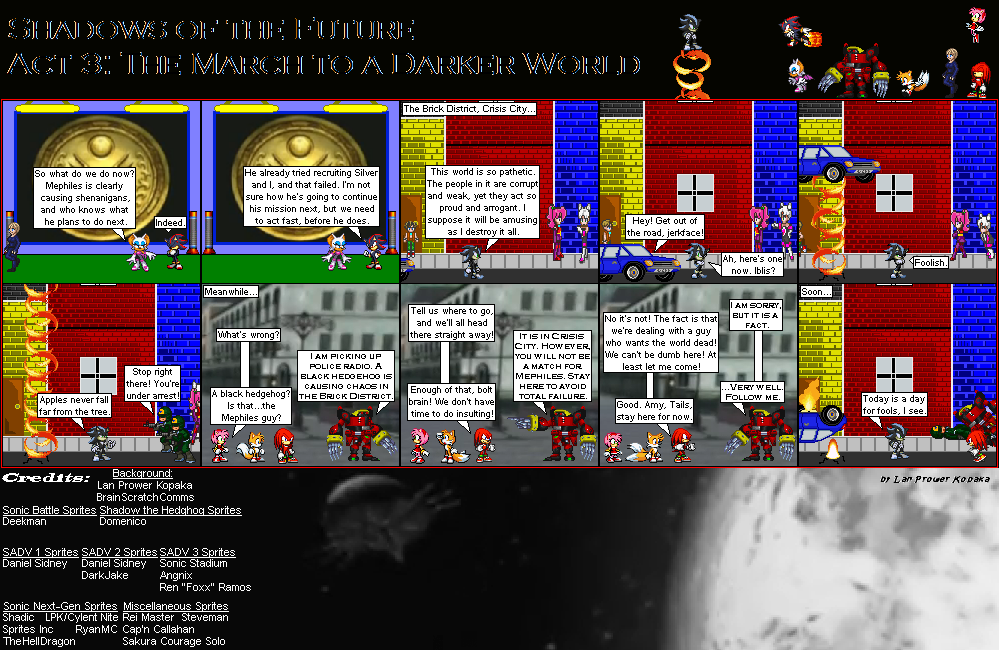 Things are getting darker and hotter here, fans and fanettes! As we march to a darker world, Knuckles and Omega take on Mephiles and Iblis in its infant form. Things are going to get very hectic here!

As for our new local, the Brick District, I made this with the help of XNinjaRed. He's a great dude and you should check out his stuff, he even made a sprite comic way back in the day. =P

But yes, I'm going to have a lot of fun with the Brick District. Watch how it evolves as our story goes on. ;) 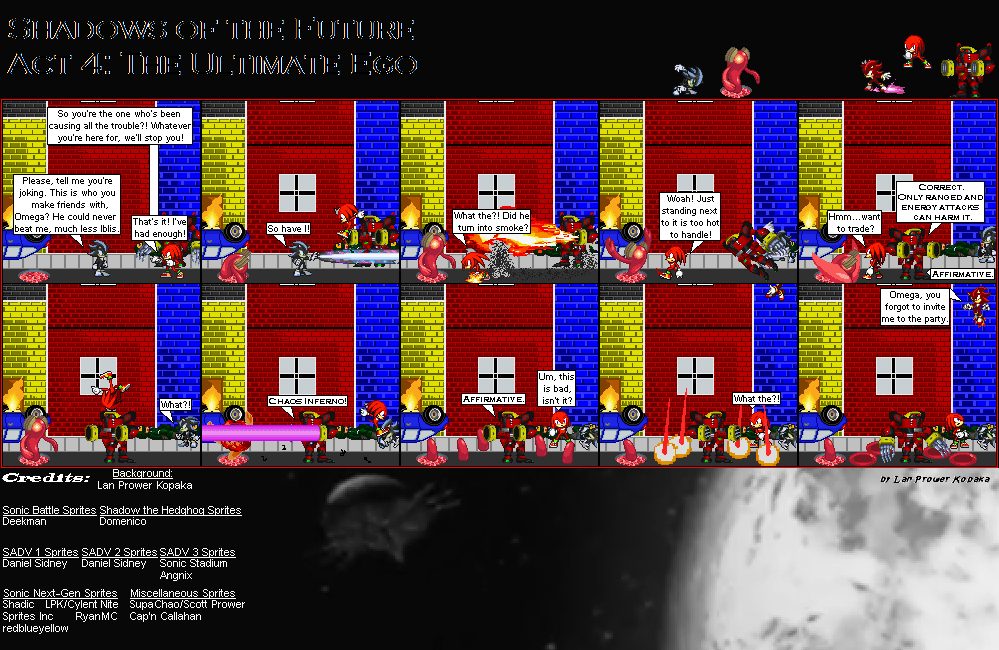 The new comic is here! Today, we have a great battle between Knuckles and Old Omega, versus Mephiles and Iblis in his infant state, and as you can see, he's already a threat even while infantile. Granted, the only reason they have trouble with the beast is because it's so small and hot, but that's why having a ranged fighter like Omega, or Shadow, helps. :P

I'm still not quite sure how much I like Mephiles' smoke transition, but I think it works for what I wanted. Mephiles has a surprising amount of powers and attacks, but he rarely uses them all for combat. Like this smoke maneuver for example, he doesn't use it in his battles with Shadow from Sonic The Hedgehog 2006, but it's an effective move. I will be trying to incorporate more of these as the series goes on, depending on if I run into sprite limitations. 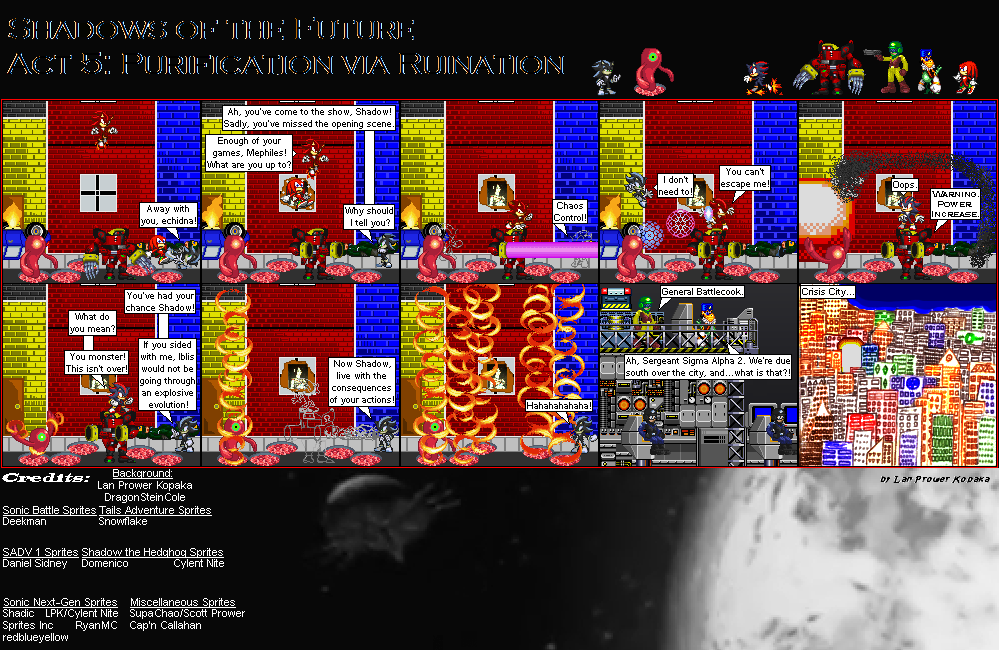 So yeah...I blew up the Brick District. :P Well, not all of it, but that block is gone, and with Iblis' power spike, the rest of the Brick District is coming soon. In the meantime, Diablon and the rest of G.U.N. are trying to arrive with help, considering Eggman invaded and Princess Elise died, but things are not pleasant to see.

By the way, that's a portrait of Princess Elise, in case it's tough to tell. I was going to leave it blank at first, but I needed something to touch up the room. Right before it blows up, of course... 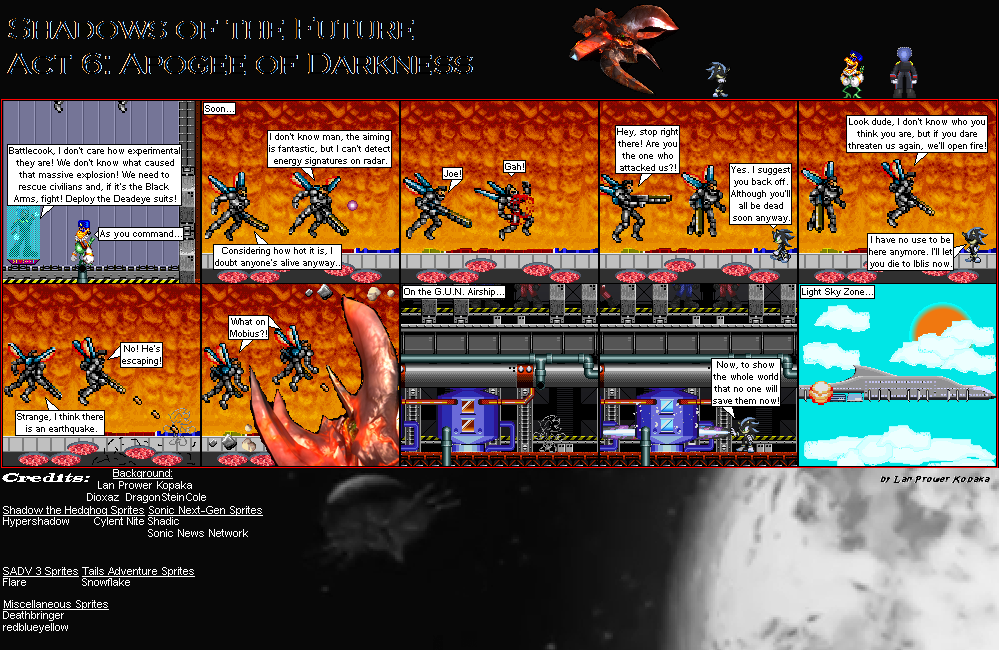 ​Well, I've finally completely obliterated the block. :P There's still some left of the Brick District, but Iblis will take care of that in due time too. While, in the meantime, Mephiles destroys the engines of the Natilia, the very ship our commander and General Battlecook are on. Things are certainly getting worse... 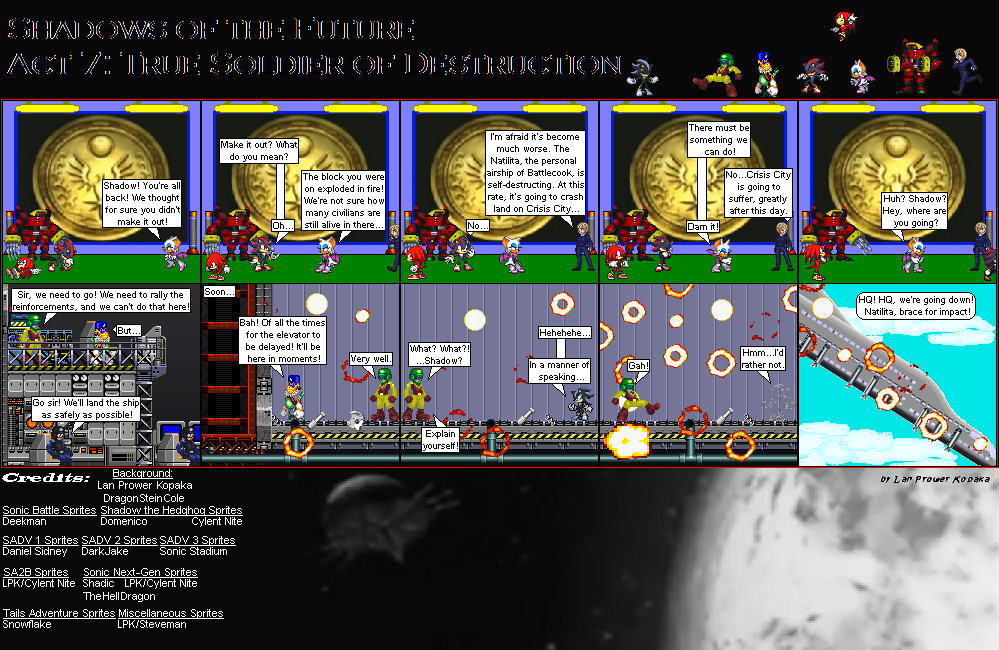